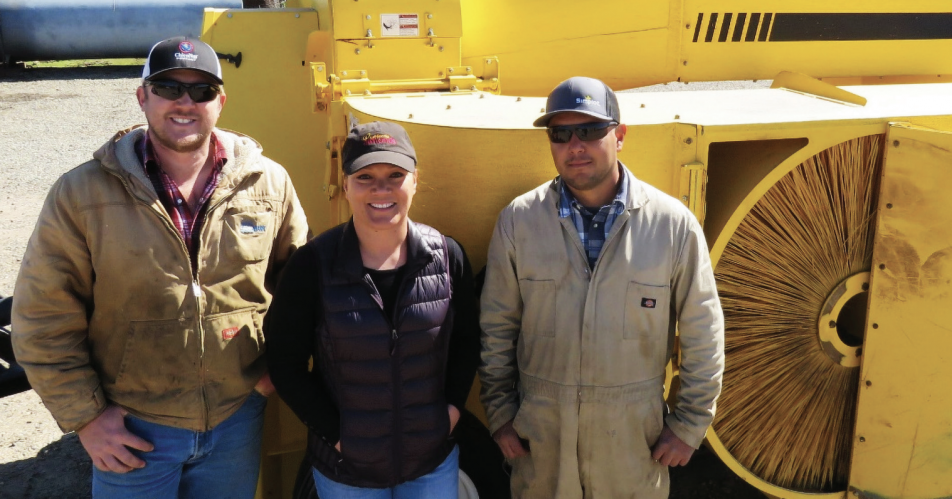 Justine Pitts did her homework prior to purchasing two new low-dust harvesters, educating herself on the benefits of technology promised to reduce dust and improve orchard health. But nowhere in her research did she read that she would also save money replacing coveralls for her employees. “Our guys don’t even wear their coveralls during harvest now because there’s so much less dust,” said Pitts, who farms 775 acres of almonds in Ballico in northwest Merced County. “Worker morale is definitely up thanks to the new harvesters.”

While cleaner clothes may seem like a small benefit, it’s emblematic of the tangible changes she and her harvest team have seen in the orchard following their first harvest season with the new low-dust equipment. “There’s significantly less dust, which makes it easier for our crew to see,” Pitts said. “You also tend to get mites when you blow dust, and where we’ve had mite issues in the past, they weren’t as severe. The trees look better.” Pitts’ interest in low-dust harvesters piqued in 2016 when she read about incentive funding available through the Natural Resources Conservation Service’s (NRCS) Environmental Quality Incentive Program (EQIP). Growers who use an EQIP-approved low-dust harvester — machines that have demonstrated a reduction in PM10 emissions by at least 30% over conventional surface-harvester machines — are eligible for a cash payment based on each acre where low-dust harvesters are operated. “We enrolled in EQIP in 2018 and the payment for that year was $38.14 per acre,” Pitts said. “We are eligible for three years of funding in the program, which will offset the cost of the two new low-dust harvesters we purchased by 56%.”

“We want to do better by our neighbors and our workers to improve their quality of life. Almond acreage has more than doubled in 15 years and that means harvest dust is becoming more noticeable to Central Valley residents.”

Pitts says the process to apply for EQIP is relatively easy and begins with contacting your local NRCS office. Following enrollment in the program and a completed harvest season, she followed the NRCS process for verifying the acreage where low-dust harvesters were used. “We took pictures of the harvesters in the orchard during harvest and we completed a one-page practice completion form,” Pitts said. “It’s pretty painless.” The main limitation almond growers face when looking to apply for EQIP is the adjusted gross income cap. Proactive steps to reduce harvest dust, such as those taken by Pitts, support the broader almond community’s investment in improving production practices for the benefit of growers, their neighbors, and their communities. The Almond Board of California (ABC) recently launched its Almond Orchard 2025 Goals, four goals that serve as a guidepost to lead the almond community forward on a path of continuous improvement. One of those four goals is reducing dust during almond harvest 50% by 2025. “We want to do better by our neighbors and our workers to improve their quality of life,” said Gabriele Ludwig, Ph.D., director for Sustainability and Environmental Affairs at ABC. “Almond acreage has more than doubled in 15 years and that means harvest dust is becoming more noticeable to Central Valley residents.”

“We did it because we want to do our part to clean the air. We also did it because it makes good economic sense. Farmers are price-takers — not makers — and all costs are going up. Taking advantage of incentives is key to help offset rising costs.”

Ludwig notes that low-dust incentive programs provide a win-win solution for growers and their neighbors while advancing the almond community toward achieving its 2025 harvest dust reduction goal. In addition to the NRCS low-dust program, the San Joaquin Valley Air Pollution Control District (Air District) recently launched a low-dust nut harvester replacement program. In that pilot program, growers are eligible for incentive funding at 50% of the costs for approved low-dust equipment. Jesse Roseman, senior specialist in Environmental and Regulatory Affairs at ABC, said both NRCS and Air District programs have received strong support from the Almond Board. “An NRCS Conservation Innovation Grant project utilizing ABC-funded research methods helped establish the original NRCS low-dust program,” Roseman said. “ABC, along with the Air District, also co-funded the research that led the District to establish that pilot program, which initially provides $1 million for incentive funding.” Roseman notes that while all Air District funding has been allocated to date, he encourages growers to contact the Air District to enroll in the program in case more incentive funding becomes available. Eligible growers in both the San Joaquin and Sacramento Valleys are also encouraged to apply for the NRCS program, which still has available funds. As for Pitts, she said she has no regrets about participating in the NRCS program and hopes that more growers will take advantage of low-dust equipment incentive programs. “We did it because we want to do our part to clean the air,” Pitts said. “We also did it because it makes good economic sense. Farmers are price-takers — not makers — and all costs are going up. Taking advantage of incentives is key to help offset rising costs.”

Original article posted in “How We Grow” Magazine, a resource of the Almond Board of California.

This site uses Akismet to reduce spam. Learn how your comment data is processed.